Learn the story of The Red Ghost

Jason Flood was born in the little town of Franklinville New Jersey in 1990. Born into an aviation family, Jason was exposed to flying at a very early age. He began flying with his dad at only 6 months old. His father was an avid aviator who enjoyed buying and restoring various aircraft. Outside of flying each of these aircraft, each completed project would go on to fund the next.

Flying throughout his youth with his father in the family Beechcraft Staggerwing, Jason often found himself at EAA AirVenture, the world’s largest aviation gathering. With so much hands-on experience in aviation, it wasn’t long before Jason found himself hooked. Spending a lot of time in the air with his father, Jason gained a great deal of experience at the controls.

Jason’s family was no stranger to the Pitts Special. When he was barely a teenager, his brother and father had already restored and flown several different models of Pitts aircraft. At one point Jason’s father bought a two seat Pitts S-2A. Being a two seat aircraft meant that Jason was no longer stuck on the ground forced to watch his dad and brother having all the fun. At the time Jason was barely a teenager and the two seats meant he could finally get up in the air and do some Pitts flying for himself. By age 15 Jason really wanted a Pitts of his own. His nose was constantly glued to trade-a-plane magazines and online. One day he finally found it. The ad was for a 150HP Pitts S-1S that had been sitting in a hangar in Louisiana since Hurricane Katrina went through. The aircraft had some minor damage and was being sold “as is”.

The seller was called and a promise was made to take the airframe. Jason’s father and a family friend flew down a week later, rented a U-haul truck, and spent a little less than 5 hours dismantling and loading the aircraft. After driving 24 hours non-stop they were home just before Jason went to bed. At 6am the next morning Jason was up running around looking for jumper cables talking about how he only had a half-hour before he had to be at school. Jason and his father ran gas through the system and cranked it over. The engine started almost immediately, and it was a full week before Jason could stop grinning. Over the next few months the aircraft was restored.

For a while Jason had been taking lessons in a Piper PA-12 Super Cruiser, a tailwheel aircraft that requires a higher level of precision to learn how to fly over that of a tricycle gear Cessna 172 or Piper Cherokee. Getting eager to fly his Pitts, the family drove down to Bill Finagin’s Pitts School in Annapolis, Maryland where Jason and his brother Joseph took a couple of hours of spin training. This had Jason even more fired up to fly the Pitts. Then the big day came. About 20 people or so from the local EAA chapter came out to watch the event. It was Jason’s 16th birthday and it was the day he would make his first solo in any aircraft. What made the day even more special for Jason was the fact this his first ever solo was going to be in his very own Pitts S-1S. He took one more hop first with his instructor in the PA-12 to get his head in the game and then it was time.

The following is Jason’s account of the events that followed:

“Then I was strapping into the Pitts, and I couldn’t believe how nervous I was. I was really going to do this. During the run-up, I remember thinking how this had always been a dream of mine. I lined up on the runway, and when the power went in, the little airplane absolutely leaped forward. It was great! Then the stick went forward, the tail came up, and in a few seconds I was off and climbing. The thought that went through my head was so very clear: ‘I’m a Pitts pilot now.’ I don’t think I can describe how that made me feel.”

“The airplane felt great. It climbed like a rocket, and when I hit 1,000 feet, I started making right and left turns. It was so very cool! The ailerons were light and the airplane just seemed to know what I wanted to do. It was strange being up alone in such a tiny machine, but it wasn’t scary. I was too busy to be nervous. As I came back in to land I carried a little power onto base, then killed the power and slipped around the corner, left wing down. I gradually came out of the slip as the runway came up to meet me, and I started holding it off. I was looking both ways to make sure I was straight. Then I felt the wheels touch. The rollout, which had me worried, was actually really straight and smooth.”

“Then, as if by magic, I was back on the ramp where I started, and my brother, Joseph, had his hand in the cockpit giving me a big handshake and congratulating me. Had I not been in the airplane, I would have hugged him. As soon as I was out of the cockpit, Mom hugged me super tight and told me how proud she was. Later, I also soloed the Super Cruiser, a J-3 Cub, and a Cherokee 180.”

Over the next year, Jason finished his private certificate with a new instructor. He used his dad’s 1949 Piper Clipper for both his cross-country requirements and his checkride. Already accomplished for his age as a pilot, Jason went on at the age of 17 to learn aerobatics and started competing in various aerobatics circuits in a newer Pitts S-1S that he flies today. As one of the youngest aerobatic pilots flying in the US today, his career is already taking off. Jason has made a habit of ranking 1st place in just about all of the regional aerobatic competitions he attends.

Aerobatic flying has not been Jason’s only activity. At one point he also had a job towing banners. On August 2nd 2011 Jason was working flying banners just like any other day. But on this day the aircraft he was flying had an engine failure at low altitude while attempting to pick up the next banner. The engine failure resulted it a sudden loss of forward airspeed and the aircraft hit the ground with enough force to cause massive life threatening injuries. To learn more about this incident and the story of The Red Ghost click here.

Watch for Jason to take flight at an air show near you. If you have an aviation event where you would like Jason to perform, drop us a line at the Contact Us page. 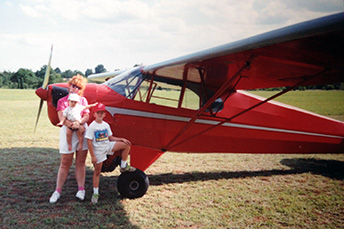 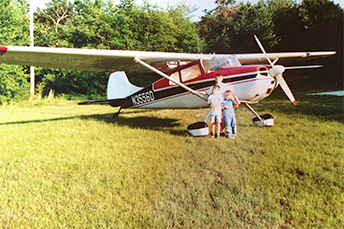 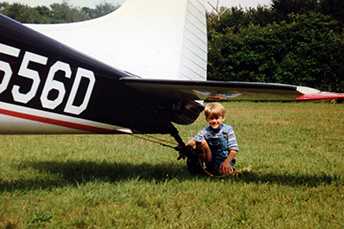 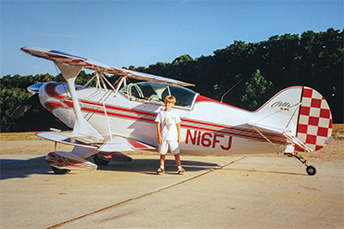